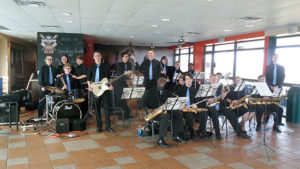 Freedom’s 2017 Annual Meeting was April 11 at Ripken Stadium. Prior to the meeting’s start, members enjoyed music provided by the C. Milton Wright Jazz Band. A hors d’oeuvres buffet and drinks were served. In addition, several staffed “stations” situated throughout the venue provided members more information about our offerings and answered questions, particularly about electronic services. Upon entering the event, members received a ticket for door prize drawings and a card that could be marked at each of these five stations.

As the Annual Meeting began, members met members of our Board of Directors and Supervisory Committee. Next, those in attendance reached a quorum to approve the notes from last year’s meeting. Following the formalities, Board Chairman, Mike Kaiser, and President/CEO, Michael MacPherson, each made brief remarks. Mr. MacPherson gave an overview of  Freedom’s state of affairs, he discussed our mission and plans for the future. This discussion was followed by a new video providing a general overview of the Credit Union — who we are, what our values are, and what we can do for members. The evening’s business concluded with a question-and-answer session between members and the President/CEO.

As a gift to all in attendance, members received a plush Freedom throw blanket. Members enjoyed replenished refreshments throughout the evening’s proceedings. To wrap up the evening, Mr. MacPherson drew random winners for each of 10 door prizes.  Prizes were gift cards worth $25 apiece from a variety of local stores and restaurants. Finally, all full participation cards were collected and Mr. MacPherson drew a winner for the grand prize of $100!

Several new attendees came out to enjoy this year’s annual meeting. We love to meet our members, and hope to see more next year! Please remember that our Annual Meetings are open to all members, and always take place in the evening. These meetings provide a great opportunity to learn about Freedom and get your questions answered while enjoying a great evening out!

Freedom held its 63rd. Annual Meeting of Members on April 12 at the McFaul Center in Bel Air. To begin the evening, attendees received a small gift and mingled over refreshments.

Starting the meeting, cadets from the Maryland National Guard, Freestate ChalleNGe Academy presented the flag. This was followed by employee Jay Jones’ fantastic rendition of the national anthem. Who knew Freedom had such multi-talented employees?

In his keynote speech, Mike MacPherson, President/CEO, traced the history of Credit Unions to Germany in the mid-1800s. Mr. MacPherson noted Freedom continues to operate by the Credit Union principles of “People Helping People” and “Not-For-Profit, Not-For-Charity, But for Service.” After his presentation, Mr. MacPherson and Mr. Kaiser answered questions from members in attendance.

This year’s Annual Meeting of Members will take place at Bel Air’s McFaul Activity Center, on Tuesday April 12th. Doors open at 6 pm, and the meeting is from 7:00 – 8:00.

Please join us for a review of the past year’s activities. You’ll learn more about your credit union and will have the chance to ask questions and voice your opinion.

All our members are welcome! Refreshments, goody bags, and door prizes will be offered. Please RSVP by registering online, visiting a branch, or calling 800-440-4120.

We hope to see you there!