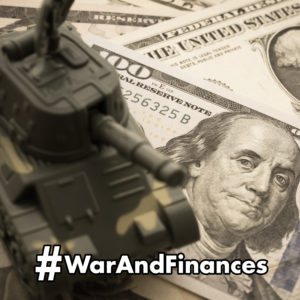 Q: Now that Russia has invaded Ukraine, and the fighting does not seem to be ending anytime soon, I’m worried about the U.S. entering the war. It really has me wondering; How does war impact the economy and how can I protect my money in case of war?

A: While we all hope the war taking place between Russia and Ukraine won’t spread further, when major countries are at war it does impact the global economy. Here’s how the war in Ukraine is influencing the U.S. economy and American banking, additional fallouts we may be facing soon and steps you can take to protect your assets in case of war.

How does war affect American banking?

The U.S. Treasury Department has banned all financial institutions in the U.S. from opening or maintaining correspondent banking accounts for Russia’s largest bank (Sberbank) and its subsidiaries. By March 26, Sberbank will be effectively cut off from the U.S. financial system. This directive is part of a group of sanctions the Biden administration has placed on the Russian state-owned VTB Bank, and new debt and equity restrictions on more than a dozen Russian entities. All assets held by the blacklisted companies and institutions are now frozen, and U.S.-based individuals and companies can only conduct business with them if they receive exclusive permission from the U.S. Treasury Department.

However, despite these sanctions, most U.S. banks and credit unions will continue to operate in a regular capacity throughout this time. Financial institutions have compliance officers on staff to ensure all federal laws, including wartime sanctions like these, are followed completely and without interrupting ongoing service. In addition, the financial service industry has experience dealing with similar sanctions from Russia’s annexation of Crimea in 2014, and more recently, sanctions related to China and Venezuela. [At Freedom FCU we will continue to provide the high level of personalized and professional service you’ve come to expect despite an ongoing wave of sanctions.]

Some U.S. banks are also fearful that there may be a wave of retaliatory cyberattacks from Russia in response to the sanctions placed against the country by the U.S. and other Western countries. While there is no way to predict what will happen, it’s a good idea to be extra alert for possible banking hacks.

How does war affect the economy?

Various wars in our country’s history have had an inflationary effect on the economy. During the Civil War, this was caused by the Confederacy printing money to pay its soldiers. During WWII, the U.S. economy was running at almost full capacity with high levels of government spending. These factors, along with a shortage of workers, led to wartime inflation. In addition, the shortage of goods and services, which is common during war, as well as a shortage on raw materials like crude oil, also trigger inflation.

Unfortunately, we have already begun feeling the effects of war on a challenged economy. You may surely have experienced a spike in prices at the pump. In some areas of the country, like San Francisco, prices had already hit an all-time high of $5 in the beginning of March. This increase is a direct result of the many severe sanctions that have been placed on Russia by the U.S. and the European Union, which impact Russia’s ability to sell crude oil. The price for this crucial component of gas has consequently skyrocketed.

Beyond the pump, prices on goods, like grains and metals, are also rising due to increased fuel costs as well as worries about possible future shortages. Russia and Ukraine are also major exporters of wheat and corn, as well as essential metals like palladium, aluminum and nickel, which are used in a wide range of products from mobile phones to automobiles. An interruption in the supply of these goods due to war automatically leads to an increase in prices.

Yet another factor causing prices to soar is air transport. As of March 7, 2022, Russia has closed its airspace to 36 countries. This means each of these countries must divert shipping planes to routes that are lengthier and more expensive. The extra cost of shipping, of course, gets passed on to consumers.

How can consumers protect their money in case of war?

The stock market has already taken a hit from the war, and many Americans are fearful that the war may spread and/or further impact the economy. Here’s what you can do to protect your assets:

It’s important to learn all about the ways a war can impact the economy and how you can protect your assets during wartime. This brief overview of wartime impacts on the economy, along with some actions you can take, is a great start. We at Freedom FCU encourage you to learn more from other sources and, if you’d like to discuss more, feel free to call, click or stop in.

About Freedom Federal Credit Union
Freedom serves and is open to anyone who lives, works, worships, attends school, volunteers, or has family in Harford or Baltimore County, MD. As a credit union, we are committed to putting you first, not shareholders, and helping you achieve your financial goals.  Learn more at freedomfcu.org or call 800-440-4120 to see how we can help.

Your Turn: : Have you taken any steps to protect your money in case of war?  Tell us about it on Facebook, LinkedIn,Twitter, or Instagram @FreedomFedCU. #warandfinances 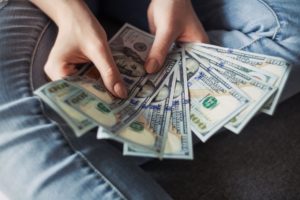 Q: It seems like I have to take out a second mortgage just to fill up the gas tank and restock the pantry. Are these inflated prices a forever thing?

A: According to the most recent report by the Bureau of Labor Statistics, U.S. inflation is currently running at a 30-year high of 6.2%, and it’s showing no signs of slowing.

Inflation is not going anywhere soon

Rising prices in just about every sector is the new norm. The inflation rate fell at the start of the coronavirus pandemic, and during the nationwide lockdown. In March 2021, though, when the impact of halted manufacturing began hitting the market and crude oil prices started climbing, the inflation rate increased to 2.6% before hitting its current high of 6.2% in October. Experts, like the Trading Economics information technology company, had predicted that number would be around 5.5%, but even that prediction fell short.

Why are prices so high?

There are several factors for the inflation bubble. First, suppliers are still catching up on production shortages that were caused by factory shutdowns during the pandemic. Second, climate disasters, like California wildfires and a drought in Brazil, are responsible for driving up prices in the food industry. The demand for higher wages, partially caused by the 11 million job openings in the U.S., and the rising cost of gas, are contributing to inflation as well.

What can consumers expect in 2022?

Your Turn: When do you think the inflation rate will fall? Tell us about it on Facebook, LinkedIn,Twitter, or Instagram @FreedomFedCU.

Freedom Federal Credit Union is a community-chartered federal credit union offering consumer financial services to those who live, work, volunteer, worship, attend school, or have family in Harford and Baltimore Counties. Additionally, Freedom offers a full-line of banking services for all businesses, associations, and other organizations that are based in Harford or Baltimore County.  Freedom has been in business since 1953 and has six locations throughout Harford and Baltimore County. To learn more, visit freedomfcu.org.