ALERT: The Edgewood branch will be operating under a modified schedule until August 12. Please visit our Branch Locations page for details. 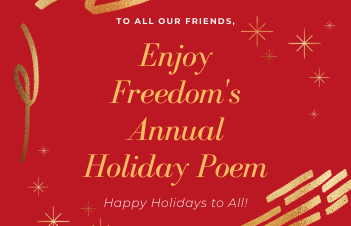 ‘Twas the holiday season and one that’s far different
As we try to stay positive and not be ambivalent
There’s been some bad stuff, but a lot of good too
With hopes for better times beginning to shine through.

Folks were keeping safe at work and in homes
Trying to stay happy despite all the unknowns.
And I working hard in my makeshift home office
Was looking for clues as to what this year might have taught us

When outside my window I heard such a clatter,
I sprang from my chair to see what was the matter.
I pulled up the blinds and lifted the window
Then leaned my head out to see what was below.

The light from the moon and neighbor’s decor
Cast a glow o’er the yard like I’d not seen before.
When what, in amazement, did these lights finally show,
But a rather large man, face down in the snow.

All I could see were the red clothes that he wore,
And it looked just like Santa, though I couldn’t be sure.
I ran quickly down to help, since he seemed so distraught,
But there was more going on than what I first thought.

As I helped him get up, I heard from my roof
The scraping and banging of numerous hoof.
I looked and saw reindeer, but not the usual eight
And as I hoisted him up, he said, “Man, we’re so late”.

“I’m down to five reindeer and two are the backups
Which is leading to more than just a few crack ups.”
I asked what had happened, why the reindeer depletion
And was it keeping him from his delivery completion.

“It’s sure slowing me down”, he said, “but that’s not the worst,
Everything’s been going wrong; it’s as if we are cursed.
First the reindeer got sick, then my sleigh lost some magic
And I keep falling off roofs, it’s really quite tragic.”

He went on to explain trouble with his ion shield,
Charged particles held together by a magnetic field.
He said it protects him from the heat on his flight
And without it he’d be just a fireball in the night

Then there was the drop in repulsive energy he’s using
Which compensates for gravity so he can keep cruising.
I was saddened to see him so dejected and down
And I’d never seen Santa’s face wearing a frown.

I pretended to understand though I was really quite lost,
But I knew I had to help him no matter the cost.
I assured him there was no curse and things would improve
He just needed some help getting back into his groove.

So I thought and I thought what it was I could do
I had no experience with this nor did anyone I knew.
Then I suddenly realized and became quite ecstatic
The answer was what Santa said, it was all about magic.

I said, “Remember who you are and what you symbolize
If you think long and hard I know you’ll realize
That the solution you seek is not some radical cure
It’s something more subtle and something more pure.

What drives you each Christmas and us through the year
Is the magic around us daily in all we see and hear.
It’s the love that we share, the laugh of a child.
he closeness of friends and the warmth of a smile.

It’s the kindness of strangers, the beauty of nature
That fills our souls knowing we’re part of something greater.
This then creates the magic we all need for your fuel
And makes everything right on this and every yule.

Santa then glowed with Christmas spirit and knew all was fine
His status back in intact with everything working in time.
He said, “I can’t thank you enough for the help and understanding
And patiently listening and my problem comprehending.”

So I got out my ladder but he just flew up to the roof
If I had any doubts he was fine that was my proof.
His ion shield began to shimmer, his repulsive energy sped
And the reindeer became focused on the journey ahead.

He said, “This Christmas day and every day after
Cherish the good times, the smiles and the laughter.
Make each moment count, don’t let things go unsaid
And may happiness be yours on the road yet ahead.”

Then he jerked on the reigns and the sleigh it did soar.
And I felt optimistic for what the future had in store.
Then he said with a laugh as he flew out of sight
“Merry Christmas to all and to all a good night.”